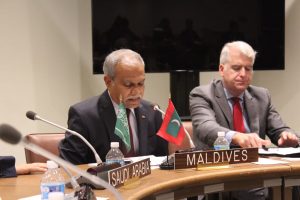 The Maldives hosted a Side-Event entitled “Countering Violent Extremism: Promoting Community Level Prevention” at the margins of the Seventy Second Session of the United Nations General Assembly this afternoon.

The event was held in partnership with the Permanent Mission of Saudi Arabia to the United Nations. The event was moderated by the Minister of Foreign Affairs, Dr. Mohamed Asim.

During Minister Asim’s speech, he stated that no country is immune from the threat of Violent extremism and that it spreads fear, hate, and it challenges the States, and the democratic order in the country. Minister stated that extremists propagate ideology of hate and division, ideologies that reject the Islamic teachings and the values of democratic, progressive, and inclusive societies.

Minister further briefed the delegations on the efforts by the government to combat violent extremism. He said that the comprehensive policy of President Abdulla Yameen Abdul Gayoom, unequivocally condemns all forms of support for, and participation in, any acts of terrorism and violent extremism. Minister also noted the Anti-Terrorism Act passed in 2015 which enables law enforcement agencies and the prosecuting authorities to specifically address foreign terrorist fighters and those providing financial or material support to terrorist or violent extremist organisations.

Major Hassan Amir from the National Counter Terrorism Centre of the Maldives also delivered a presentation during the Side-Event, highlighting on the baseline study that was carried out in the Maldives on extremist ideologies to evaluate the characteristics, the extent and severity of violent extremism and terrorism.

The side event hosted by Maldives and Saudi Arabia, sought to promote better cooperation among Governments in sharing experiences and best practices in preventing the narratives of the violent extremists from being spread.

The High Level panelists who took part in the event include the Permanent Representative of Saudi Arabia to the United Nations Mr. Abdallah Y. Al-Mouallimi, Dr. Raffi Gregorian, Acting Deputy Coordinator, Bureau of Counterterrorism, United States Department of State and Dr. Jehangir Khan, Director of the United Nations Office of Counter- Terrorism. A number of delegations participated in the discussions, including Canada, UAE, Belgium and Italy, highlighting on the community level work being carried out in their respective countries to counter violent extremism.

Foreign Minister speaks at the Annual Meeting of the Ministers of Foreign Affairs... Foreign Minister called on the President of Nauru on the sidelines of the 72nd...
Scroll to top