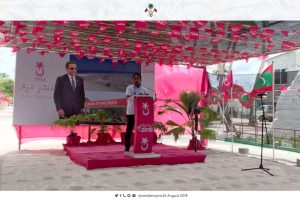 President Abdulla Yameen Abdul Gayoom has today stated that the people of the Maldives need a leader who can fulfill their visions and dreams. The President made this remark while speaking in Guraidhoo Island of Kolhumadulu Atoll this morning, at a function organized by Progressive Party of Maldives.

Speaking at the ceremony, the President said that the principles upheld by this administration serve to maintain peace and stability among the people, while safeguarding the Islamic faith. President Yameen also said that by putting forth these national values, this administration has managed to develop the country and gain progress in all areas.

In his speech the President called upon everyone to put the religion first, and then the nation. President Yameen also noted that the peace of the country was owed to our Islamic faith.