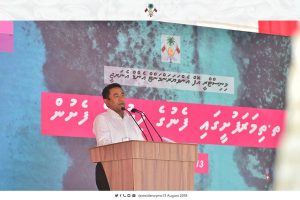 President Abdulla Yameen Abdul Gayoom has stated that the people will always look for, and ask for ways to fulfill their needs for a better future. He also said that a 5 year term is a very short period to fulfill the basic needs of the people, and to complete the numerous development projects planned for the islands.

The President made these remarks while speaking at the function held this morning to inaugurate the water supply services in Thimarafushi Island, Kolhumadulu Atoll.

In his speech, President Yameen reiterated that he will continue to focus on the prosperity of the people by fulfilling their needs and completing the development projects in the islands.

The President emphasized the importance of capable leaders for a brighter future for the country, and bringing positive change. He also stressed the importance of the citizens’ cooperation and support to the leaders, in order to reach the society’s common goals.

Speaking at the ceremony, President Yameen noted that the citizens need to put forth the national harmony and peace, and highlighted our national values that we must fight to defend, as Maldivian citizens. The President also noted the many challenges faced as a result of his efforts to protect our Islamic faith and national harmony.

PRESIDENT INAUGURATES WATER SUPPLY SERVICES IN THIMARAFUSHI ISLANDPRESIDENT YAMEEN TAKES PART IN THE CEREMONY TO MARK THE COMPLETION OF BEACH...
Scroll to top