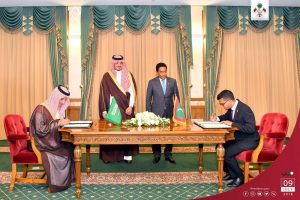 The Minister of Interior of the Kingdom of Saudi Arabia, His Royal Highness Prince Abdulaziz bin Saud bin Nayef bin Abdulaziz Al-Saud paid a courtesy call on the President of Maldives His Excellency Abdulla Yameen Abdul Gayoom, at the President’s Office this afternoon.

During the call, the President welcomed His Royal Highness and the accompanying delegation to the Maldives, and conveyed greetings and good wishes to the Custodian of the Two Holy Mosques, His Majesty King Salman bin Abdul Aziz Al-Saud, King of Saudi Arabia.

The President highlighted that the brotherly ties between Maldives and Saudi Arabia is built on trust, respect and the mutual belief in the Muslim Ummah. The President also noted that the relation between the two countries is currently at its peak since the formal establishment of diplomatic relations, four decades ago.

Speaking at the meeting, the President stated that the current Administration has seen great success in the pursuit of a very strong economic agenda for the Maldives and briefed His Royal Highness on the development projects and socioeconomic status of the Maldives. The President also updated His Royal Highness on the current political situation and the challenges faced in embarking on a strong, transformational agenda.

Moreover, discussions on areas of tourism, investment and Islamic Ummah were held between the President and His Royal Highness. In this regard, the President maintained that as Muslims, it is vital to portray Islam as a religion of peaceful co-existence and spoke on eliminating terrorism and all forms of its manifestation in the world. Furthermore, the President stated that as a Muslim nation, the Maldives looks up to Saudi Arabia as the leader of the Muslim Ummah.

A high-level delegation including Cabinet Ministers accompanied the President at the Call, along with other Senior Officials.

Tweet
July 9, 2018/by Maldives Embassy
https://www.maldiveshighcom.in/wp-content/uploads/2021/02/Logo-High-Commission-of-the-Republic-of-Maldives.png 0 0 Maldives Embassy https://www.maldiveshighcom.in/wp-content/uploads/2021/02/Logo-High-Commission-of-the-Republic-of-Maldives.png Maldives Embassy2018-07-09 14:54:042018-07-11 14:58:10THE MINISTER OF INTERIOR OF THE KINGDOM OF SAUDI ARABIA PAYS A COURTESY CALL ON THE PRESIDENT

MOU SIGNED BETWEEN THE MALDIVES AND SAUDI ARABIAForeign Minister Dr. Mohamed Asim, Special Envoy of the President of the Maldives,...
Scroll to top