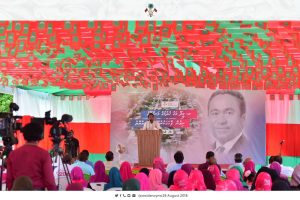 President Abdulla Yameen Abdul Gayoom has stated that he would always put the country’s peace above all and that he would always uphold justice. He made this statement while addressing the public at the ceremony held to mark the completion of road development project in Meedhoo Island, North Maalhosmadulu Atoll this afternoon.

During the ceremony, President Yameen said that the only adversaries that stand in his way are the challenges faced in bringing the development that the Maldivian people deserve.

Continuing on, President Yameen pointed out that this administration has been able to reclaim more land area to Hulhumale´ in 9 weeks, in comparison to the land area reclaimed in 9 years during the initial Hulhumale´ development phases. The President also stated that despite the major developmental milestones this administration has been able to achieve, the opposition was in denial.

Speaking further, the President urged all Maldivians to put forth national interest, and always prioritise the country’s peace and harmony.