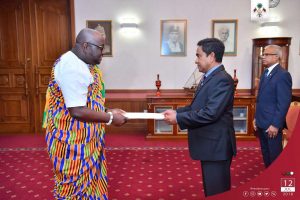 The new Non-Resident Ambassador of Ghana, His Excellency Michael Nii Nortey Oquaye Jnr., presented his Letter of Credence to President Abdulla Yameen Abdul Gayoom, this morning, at the President’s Office.

Speaking at the meeting, the President highlighted that it is nearly thirty years since the establishment of bilateral relations between the Maldives and Ghana. Moreover, President Yameen expressed hope that the existing ties of friendship between the two countries will be enhanced during the tenure of the new Ambassador. In this regard, he emphasised closer cooperation in areas of mutual interest, especially in the international front.

The Ambassador of Ghana expressed gratitude for receiving him as the new Non-Resident Ambassador to the Maldives. He discussed with President Yameen on the exploration of further areas of mutually beneficial collaboration between both countries, including tourism, education and human resource development.

PRESIDENT CALLS UPON THE PEOPLE TO UNITE FOR THE DEVELOPMENT OF MALDIVES DESPITE...THE NON-RESIDENT AMBASSADOR OF YEMEN PRESENTS HIS CREDENTIALS TO THE PRESID...
Scroll to top