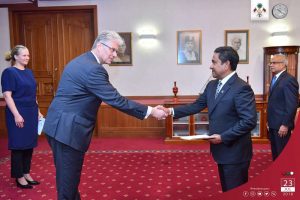 The Non-Resident Ambassador of Slovak Republic, His Excellency Ivan Lančarič, presented his Letter of Credence to President Abdulla Yameen Abdul Gayoom, this morning, at the President’s Office.

During the call, the President expressed his hopes that the existing ties between the Maldives and the Slovak Republic will be enhanced during the tenure of the Ambassador.  President further deliberated that Maldives being a small island state; sea level rise and climate change are the greatest challenges faced by Maldives, and briefed the Ambassador on the endeavors Maldives undertakes to adapt a more environmental friendly approach in tourism.