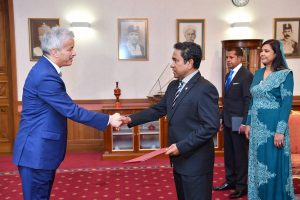 The Non-resident Ambassador of the Republic of Tunisia, His Excellency Nejmeddine Lakhal, presented his Letter of Credence to President Abdulla Yameen Abdul Gayoom, this morning, at the President’s Office.

During the call, the President conveyed greetings and personal best wishes to the President of Tunisia, H.E. Beji Caid Essebsi. He noted that the Maldives and Tunisia have enjoyed over three decades of bilateral relations and expressed confidence for closer collaboration to further strengthen the existing relations between the two countries, during the Ambassador’s tenue.

Speaking of the Maldives’ candidature to the United Nations Security Council, as a non-permanent member for the term 2009-2020, the President expressed hope that the Maldives can count on the support of Tunisia for its inaugural candidacy, as an important and valued member of the African Group. The President reflected on the Maldives’ contribution to the causes of global peace and security, counter-terrorism and climate change. He also noted that over the last five decades at the UN, the Maldives has wielded substantial impact in these areas regardless of its relative size and limited resources, and emphasised that membership at the Security Council should therefore be representative of the intent, commitment and willingness to serve.

The Ambassador thanked the President for his warm welcome and conveyed greetings and good wishes of the President and the people of Tunisia to the Government and the people of the Maldives. He expressed his honour to represent Tunisia as the Ambassador to the Maldives, and assured his commitment to work closely with the Maldives to steer the existing relations of friendship and cooperation towards new dimensions, for the benefit of the two brotherly countries and for their peoples.

The President was accompanied at the call by the Acting Minister of Foreign Affairs and Minister of Education, H.E. Dr. Aishath Shiham, the Minister of State for Foreign Relations at the President’s Office, H.E. Mohamed Naseer, and the Foreign Secretary H.E. Dr. Ali Naseer Mohamed.

President appoints Permanent Representative to the United Nation, Ambassador...Foreign Minister speaks at the 44th Session of the OIC CFM in Abidjan, Côte...
Scroll to top