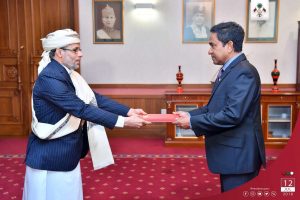 The Non-Resident Ambassador of Yemen, His Excellency Mohammed Motahar Alashabi, has presented his Letter of Credence to President Abdulla Yameen Abdul Gayoom, this morning, at the President’s Office.

During the call, President Yameen highlighted the historic ties of strong partnership that exists between the Maldives and the Arab-Muslim countries. The President further noted that the Maldives and Yemen have a long history of close relations, and assured full commitment to build a more durable and productive set of bilateral ties in the years ahead.

President Yameen and Ambassador Alashabi also touched on ways to further strengthen the working relationship between the two countries across a wide array of issues, including combatting the global threat of terrorism.

During the call, the Ambassador of Yemen congratulated President Yameen for his administration’s achievements with regard to progress and development of the Maldives.

The President was accompanied at the call by the Minister of Foreign Affairs, Dr. Mohamed Asim and Minister of State for Foreign Relations at the President’s Office, H.E. Mohamed Naseer.

THE NON-RESIDENT AMBASSADOR OF GHANA PRESENTS HIS CREDENTIALS TO THE PRESID...APPLICATION OPEN FOR MEMBERSHIP OF ELECTIONS COMMISSION
Scroll to top