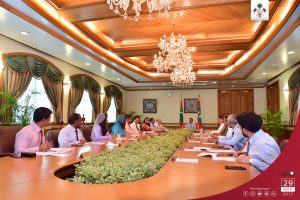 After much deliberation at a cabinet meeting held today, the President decided to sign a Free Trade Agreement with China. The meeting was presided over by Minister of Economic Development Mr. Mohamed Saeed and Minster of Foreign Affairs Dr. Mohamed Asim.

During the meeting, Minister Saeed stated the China-Maldives Free Trade Agreement Negotiation was in the pipeline since 2014, when it was first initiated. He also mentioned that the ongoing talks to establish a free trade pact will enable exemption of duties on fishery products exported to the world’s largest consumer market.

Minister Saeed also stated that the Maldivian government has extended invitations to establish free trade agreements with countries including Japan, the United States of America, the United Kingdom and countries of the European Union.

He further expressed confidence that other countries would soon look to establish similar agreements with the Maldives.