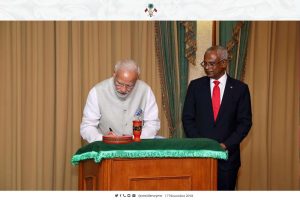 President Ibrahim Mohamed Solih has met with His Excellency Narendra Modi, Prime Minister of India, at a meeting held at the President’s Office this evening.

During this meeting President Solih expressed his gratitude and extended a warm welcome to the Prime Minister of India for visiting Maldives to witness the Presidential Inauguration.

Prime Minister Modi of India congratulated President Solih on his assumption of office, and thanked him for the special gesture of inviting him to the Inauguration. The Indian Prime Minister also conveyed greetings and compliments from the people of India to the people of Maldives, on consolidation of democracy, which he highlighted was essential for peace, prosperity, and stability.

During the meeting, the two leaders shed light on the long existing bilateral relations between Maldives and India, and discussed ways to further strengthen the existing relations between both countries. Prime Minister Modi also assured President Solih of India’s continued cooperation and assistance to Maldives to achieve sustainable social and economic development.

Speaking at the meeting, the President expressed his appreciation to the Indian government for the continued assistance provided to the Maldives throughout the years.

Furthermore, both leaders shed light on issues of mutual interest to both countries, and agreed on the importance of maintaining peace and security in the Indian Ocean, as well as being mindful of each other’s concerns and aspirations for the stability of the region.