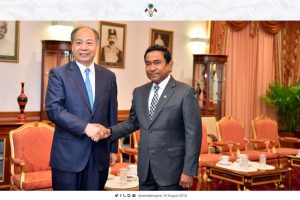 The Representative of the Chinese Government and the Head of the International Development Cooperation Agency of Cihna, His Excellency Wang Xiaotao paid a courtesy call on the President of Maldives His Excellency Abdulla Yameen Abdul Gayoom, at the President’s Office this morning.

During the call, the President conveyed warm greeting and best wishes to the President of China, His Excellency Xi Jinping and welcomed the Chinese delegation to the Maldives. Highlighting that the Sina-Male’ bridge will be inaugurated this evening, the President stated that the bridge reflects the aspirations of the Maldivian people, especially the youth. In this regard, President Yameen expressed his sincere gratitude and deep appreciation to the President and the people of China for their tremendous support in realising this dream.

The President also highlighted the warm and long-lasting bonds of friendship between China and the Maldives, noting that it sets a great example of a relationship between larger and smaller countries. President Yameen also underscored that the Sino-Maldives partnership is mutually beneficial to both countries, and expressed his ardent desire to further reinvigorate and diversify the close bonds of friendship.

Mr. Wang Xiaotao also assured the President of China’s continuous support and contribution towards the social and economic development of the Maldives. He also wished success to the President for the upcoming Presidential election.

Tweet
August 30, 2018/by Niharika Sharma
https://www.maldiveshighcom.in/wp-content/uploads/2021/02/Logo-High-Commission-of-the-Republic-of-Maldives.png 0 0 Niharika Sharma https://www.maldiveshighcom.in/wp-content/uploads/2021/02/Logo-High-Commission-of-the-Republic-of-Maldives.png Niharika Sharma2018-08-30 15:40:252018-08-30 15:40:25THE REPRESENTATIVE OF THE CHINESE GOVERNMENT AND THE HEAD OF THE INTERNATIONAL DEVELOPMENT COOPERATION AGENCY OF CHINA PAYS COURTESY CALL ON THE PRESIDENT

INTERNATIONAL PARTIES REQUIRE EC AUTHORIZATION AND BUSINESS VISA TO OBSERVE...MINISTER OF FOREIGN AFFAIRS HOSTS LUNCHEON IN HONOUR OF THE REPRESENTATIVE OF...
Scroll to top