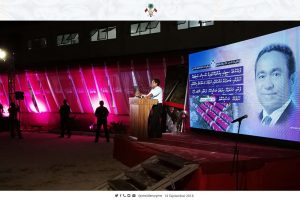 President Abdulla Yameen Abdul Gayoom has stated that the role of youth generation is vital in bringing a positive change. The President made this remark while speaking at the ceremony held this evening to mark the completion of five projects in Fuvammulah City.

During his speech President Yameen said that it is necessary to have a courageous youth generation for the progress of any country or a community.

President Yameen spoke on the special efforts to be made to complete infrastructural development projects in the islands and the cities in the upcoming 5 years.

Further, the President said that his aim is to discontinue importing at least 5 food items including fruits and vegetables in the coming 5 years, and be able to completely rely on Maldivian products and expanding the agriculture sector.

President Yameen also highlighted the efforts made by this administration to provide more job opportunities and noted that so far the administration has provided almost 100,000 additional jobs, of which 99% is occupied by Maldivians. President Yameen also said that 160,000 job opportunities will be introduced in the tourism sector in the coming years.

During this ceremony, the President initiated sewerage services and water services, inaugurated housing units and nature park, and marked the completion of the harbour revetment project in Fuvammulah City.

Earlier today, President Yameen visited Feydhoo of Addu City, and inaugurated the water services of Feydhoo, Maradhoo and Maradhoo-Feydhoo, and marked the completion of the land reclamation project in Feydhoo.

PRESIDENT YAMEEN PARTICIPATES IN THE CEREMONY TO MARK THE COMPLETION OF FIVE...PRESIDENT YAMEEN CONVEYS HIS BEST WISHES TO THE NATIONAL FOOTBALL TEAM AHEAD...
Scroll to top