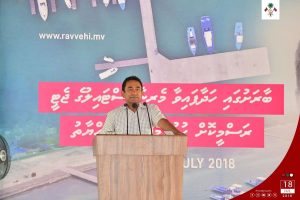 President Abdulla Yameen Abdul Gayoom has stated that even today, there are those who are committed to fulfilling the needs of the Maldivian people.  He made this remark while speaking at the function held to inaugurate the marina style jetty in Baarah Island, this evening.
Speaking at the ceremony President Yameen noted that without the desire to develop and grow it is not possible to realise our dreams. The President also said that the Maldives is an example to the world in fulfilling the people’s needs and resolving their challenges.
Addressing the people, President Yameen reiterated his administration’s commitment to ensuring the rights of the people. Noting that the safety of the people is what the public needs, the President said that it is necessary to defend the rights of the people in order to assure a peaceful and harmonious society.
Reflecting on the challenges faced by his administration, President Yameen noted that it has been a difficult Presidential term. Moreover, the President also emphasized the work done by his administration for economic and urban development of the country. Speaking in this regard, President Yameen underscored the efforts made to modernize the education system, in order build a technology friendly youth generation.
President Yameen began his three-day visit to some islands in the North and South Thiladhummathi Atolls yesterday. On day-one of his tour, the President inaugurated the services of sewerage system in Nolhivaram Island. He also took part in the ceremony to mark the completion of beach protection project in Hoarafushi Island, and inaugurated the services of sewerage system in Ihavandhoo Island.
Earlier today, the President visited Dhiddhoo Island and inaugurated the island’s clean drinking water services and housing project, and attended the ceremony held to mark the completion of the island’s beach protection project and the completion of the road development project. He also visited Kelaa Island where he inaugurated the services of sewerage system.
President Yameen is scheduled to initiate the services of sewerage system of Hanimaadhoo Island tomorrow.

MALDIVIAN ECONOMY IS BOOSTING BECAUSE OF STRONG POLICIES – PRESIDENT YAME...PRESIDENT YAMEEN URGES TO STOP SLANDERING THE COUNTRY
Scroll to top