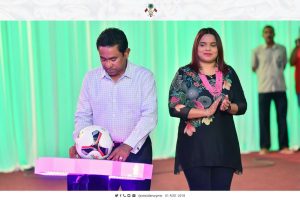 President Abdulla Yameen Abdul Gayoom has reiterated this administration’s philosophy on investing in youth and sports, as the administration accords high priority to the development of the sector. The President made this remark while speaking at the ceremony held this evening to inaugurate the Sports Arena Futsal Grounds.

Speaking at the ceremony, President Yameen announced the administration’s plans to establish big sports stadiums in the regions of the Maldives where football fever was highest. He also shed light on the challenges faced in building sports complexes. Noting the significance of developing sports regardless of the expense, the President highlighted that this administration regards it as an investment for the future.

Speaking in this regard, the President shed light on the future plans for developing the sports sector. The President shared plans to establish an international football stadium in Hulhumalé, as well as a FIFA standard football academy. In addition, he noted that Dharumanvantha Hospital will cater to athletes with its sports rehabilitation clinic.

Moreover, shedding light on the opportunities this administration provides for the youth population, President Yameen noted that by carrying out mega investments like airport development and resort development projects, the employment opportunities are doubled. He further emphasized that the target of this administration is to increase the number of youths working in the tourism industry by five or sixfold.

Concluding the speech, the President announced this administration’s plans to introduce an employment benefit scheme targeted for those working in the tourism sector. He noted that this scheme will enable the youth to be more financially stable and provide solutions for the issues they face. Moreover, President Yameen stated that this administration has decided to give guarantee for medium enterprises in the area of integrated tourism.

PRESIDENT INAUGURATES THE SPORTS ARENA FUTSAL GROUNDSPRESIDENT CALLS UPON THE NATIONAL FOOTBALL TEAM TO MAKE IT THEIR LOFTY AMBITION...
Scroll to top