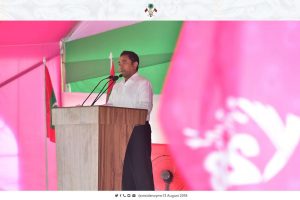 President Abdulla Yameen Abdul Gayoom has stated that the current administration has carried out land reclamation projects that equals to 20 new medium-sized islands till date. The President made this remark while speaking at the ceremony held this evening to mark the completion of beach protection project in Kandoodhoo Island of Kolhumadulu Atoll.

Speaking at the ceremony, the President noted that this administration prioritizes the needs of the people and puts in every effort to carry out projects to cater to the unique needs of each island. He also stated that progress can only be brought to Maldives by achieving our economic development goals.

Continuing on, President Yameen briefed the public on his electoral manifesto, stating that his manifesto was compiled after giving thorough consideration to the needs of the people in a way which would to resolve the maximum difficulties being faced by Maldivians.

Prior to Kandoodhoo visit, President Yameen visited Thimarafushi Island this morning and inaugurated the island’s water supply services and took a part in the ceremony held to make the completion of the beach protection project in Veymandoo Island of Kolhumadulu Atoll.