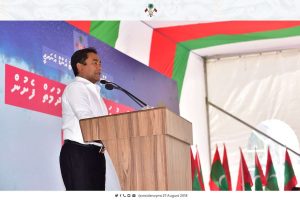 President Abdulla Yameen Abdul Gayoom has stated that his administration has created more than 76,000 job opportunities for youth generation so far. The President made this remark while speaking at the function held this morning to inaugurate the sewerage services system in Alifushi Island, North Maalhosmadulu Atoll.

In his speech, President Yameen noted that within the next 5 years the government will not only focus on providing housing for every youth above 18 years of age, but also on creating more job opportunities to ensure a more self-sufficient youth. The President underscored that the administration has always prioritised creating more job opportunities.

Highlighting that the people always want progress and development, President Yameen noted that numerous efforts have been made for the progress of sectors like education and health during this presidential term. Noting that several efforts have also been made for the progress of the fisheries industry during this term, the President said that developing the fisheries sector will be a major focus for the next five years.

During this function held in Alifushi, the President also highlighted several projects planned for the next five years for the developments of the island.
President Yameen is currently on a three-day tour to some islands of North Maalhosmadulu Atoll and South Miladhummadulu Atoll.