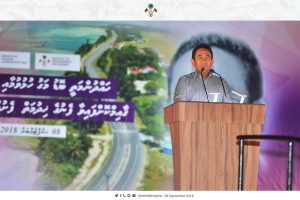 President Abdulla Yameen Abdul Gayoom has stated that his administration is constantly working on bringing the necessary rapid development to the Maldives. The President made this remark while addressing the gathering at the ceremony held to inaugurate the Haddhummathi Link Road and the water services of Fonadhoo Island, as part of his current visit to some islands of Haddhummathi Atoll.

While addressing the gathering, the President shed light on the various developmental projects that are planned to be executed in the coming years. Speaking in this regard, the President emphasized plans to upgrade the Haddummathi Kaddhoo Airport to an international airport. He further stated that this would open new windows of opportunity for the development of the youth population and stated that this would also enable the administration to expand integrated tourism to all parts of the Maldives.

In his speech President Yameen highlighted the importance of civilization as well as national development, and called upon the people to unite in defending the rights of the country.