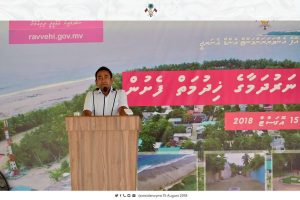 President Abdulla Yameen Abdul Gayoom has stated that it is not the political leaders who ensure justice; but that justice will be ensured by upholding the constitution and proper functioning of the courts. The President made this remark while speaking at the function held this morning to inaugurate the sewerage service system of Dhiyamigili Island, Kolhumadulu Atoll.

Speaking in this regard, the President reiterated that his administration will always uphold the constitution and rule of law. He also called upon those representing the opposition to prove all their claims against the administration through court process.

Speaking at the ceremony, the President reiterated that this administration always adheres to the rule of law, and that everyone will be equal in front of the law. He also noted that rules and regulations are established to maintain equality and peace within the community.

Further, the President highlighted that he has prioritized the people’s recommendations and opinions when compiling this electoral pledges.

President Yameen began his three-day visit to some islands of Kolhumadulu Atoll on Monday. On day-one, the President inaugurated clean water services in Thimarafushi Island. The President then took part in the ceremony to mark the completion of the beach protection project in Veymandoo Island. He also took part in the ceremony held to mark the completion of beach protection project in Kandoodhoo Island.