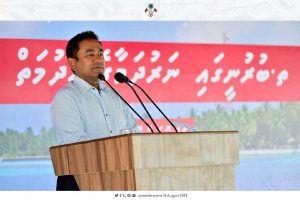 President Abdulla Yameen Abdul Gayoom has stated that this administration will put in every effort to ease the challenges being faced by the Maldivian people and will provide better living in their home islands, instead of having to migrate to another island. The President made this remark while speaking at the function held this morning to inaugurate the sewerage service system of Buruni Island, Kolhumadulu Atoll.

Speaking at the ceremony, the President noted that this administration will put in every effort to carry out development projects to cater to the needs of each island.

Speaking in this regard, the President underscored that the aim of empowering state-owned enterprises was to speed up the development projects carried out by the government. Continuing on, President Yameen stated that he will ensure that the gross national income doubles in the future.

During the ceremony the President called upon all political leaders to never play with the emotions of the people. He also urged everyone to uphold Islamic principles and come up with innovative ideas to fulfill the needs of the people, and empower the youth.