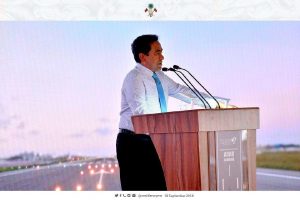 President Abdulla Yameen Abdul Gayoom has stated that today the Maldives boasts the highest standard of runways in this region. The President made this remark while speaking at the inaugurations of the new Code F runway at the Velana International Airport (VIA).

In his speech, the President noted that the completion of this new runway is a proud milestone for all Maldivians. The President also praised the pilot who captained the first A380 flight that landed at VIA, saying that he has proven the capability of Maldivian youth to the world. In this regard, the President reiterated this administration’s commitment to continued support for the growth and progress of youth.

Highlighting the importance of the airport development project, President Yameen noted that the country’s economy centers around the airport today, and that the new runway is proof of what the Maldives has achieved economically. President Yameen further said that with today’s economic growth, outsiders will not attack the freedom of our country. He said that his vision is to make the Maldives a self-sustained country, and to bring progress to the country and its citizens.

At today’s event the President and the First Lady were accompanied by the Cabinet Ministers, parliament members and senior officials of the government.