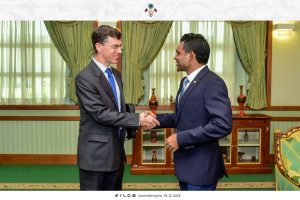 The Ambassador of the United Kingdom to the Maldives, H.E. James Dauris, paid a courtesy call on Vice President Faisal Naseem this morning at the President’s Office.

Expressing gratitude for the UK’s continuous support to the Maldives, the Vice President shed light on the existing strong relations between the two countries and spoke of working together to enhance collaboration in areas that are of mutual benefit to both countries; especially in the areas of tourism and education. Further, the Vice President welcomed the UK’s decision to open a resident mission in Male’ and thanked the UK for the mobile student visa facilitation service it has been operating in Male’ for the last 6 years.  Ambassador Dauris welcomed the Government’s decision to rejoin the Commonwealth.

At the call, the UK Ambassador congratulated Vice President Naseem on his assumption of office. He also commended the Maldives’ administration for its ambitious 100 working days program and the start of its active implementation seen in the country during the short time since coming into office.

The Vice President and the UK Ambassador also discussed ways to further strengthen the close ties between the Maldives and UK.