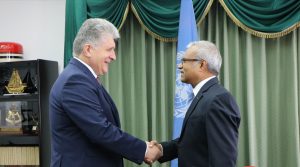 The Assistant Secretary General of the United Nations for Political Affairs, Mr. Miroslav Jenča, who is currently visiting the Maldives on an official visit, paid a courtesy call on the Minister of Foreign Affairs, His Excellency Dr. Mohamed Asim, this morning.

During the meeting which was held at the Ministry of Foreign Affairs, Minister Asim reiterated the importance the Maldives attaches to the United Nations and in this regard, welcomed the visit of the Assistant Secretary General to the Maldives. Speaking about the upcoming Presidential Elections, Minister Asim noted the importance the Government attaches to making the elections transparent, free, fair and credible. In this regard, he expressed appreciation for the support extended by the Assistant Secretary General and his team to the Government, and for engagement with all major stakeholders. Minister Asim also spoke of the important work carried out by the Maldives in the implementation of the Sustainable Development Goals (SDGs) and various other key decisions of the United Nations. In particular, he noted the significant role played by the Maldives in its current role as the Chair of the Alliance of Small Island States (AOSIS).

The Assistant Secretary General thanked the Government of Maldives for welcoming his visit and support extended to his team, which he described as signifying the close cooperation between the Government and the Department of Political Affairs. He highlighted that the implementation of the SDGs is paramount to the United Nations and in this regard thanked the Government of Maldives for its active engagement in its implementation. He expressed appreciation for the progress achieved by the Maldives in its development sectors.

THE ASSISTANT SECRETARY-GENERAL FOR POLITICAL AFFAIRS AT THE UNITED NATIONS...PRESIDENT YAMEEN DECLARES 23RD SEPTEMBER AS A PUBLIC HOLIDAY
Scroll to top