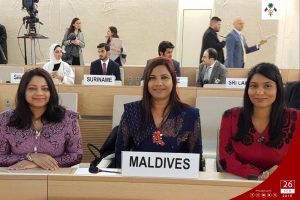 Minister Aishath Shiham, heading the Maldives delegation to the 37th Session of the United Nations Human Rights Council (HRC), attended the opening Session today, accompanied by Ambassador Hala Hameed and Minister Zenysha Zaki. These Ministers for Education and for Gender and Family respectively, will be attending the High Level Segment of the HRC session, meeting other high-level dignitaries and taking part in numerous events relating to the promotion and protection of human rights.

Minister Shiham will deliver a statement on behalf of the Maldives at the HRC at 1:50PM (Maldives Time) tomorrow, 27 February 2018. She is expected to highlight the gains the Maldives has made in delivering economic, social and cultural rights to Maldivian citizens. The Maldives has been and continues to be an active advocate of human rights in the international community, continually speaking up on issues like the rights of small states and vulnerable populations.

The Maldives will be active in negotiations on resolutions that deal with the human rights situations in Syria and Palestine, as well as on the rights of children, persons with disabilities and the environment, among others.

The Maldives is being represented by two Ministers in Geneva at a difficult time in Maldives political history. In the midst of a Constitutional crisis, the Maldives has had to take difficult steps to safeguard the Constitution and ensure that civil and political rights are preserved for present and future generations. The Government of the Maldives has welcomed the announcement by the Elections Commission of the Maldives to hold Presidential elections in September this year, and has committed to ensuring a fair and safe environment for the conduct of these elections. Further, the Government expresses the hope that all relevant stakeholders will lend their support and cooperation to ensuring an election that is free, fair and credible, and refrain from statements and actions that can further escalate the situation.

President Abdulla Yameen Abdul Gayoom, on 5 February 2018, declared a State of Emergency by Presidential Decree No. 2018/3, under Article 253 of the Constitution of the Republic of Maldives.

As per the Presidential Decree, the State of Emergency was enforced in order to protect the peace and wellbeing of all citizens, and the country, and to facilitate investigations following the events that unfolded in relation to the Supreme Court Order No. SC-SJ/01/2018, issued on 1 February 2018, which resulted in the disruption of the functions of the executive power and the State institutions vested with specific mandates under the Constitution, the infringement of national security and public interest, and if implemented, would potentially lead to an undermining of the supremacy of the Constitution of the Republic of Maldives.

Despite the declaration of the state of emergency, there will be no enforcement of a curfew; and general movements, services and businesses will not be affected.

Update on the Current Situation in the Maldives (26/02/2018): Advisory Opinion... Statement issued by the Ministry of Foreign Affairs: The Government of Maldives...
Scroll to top