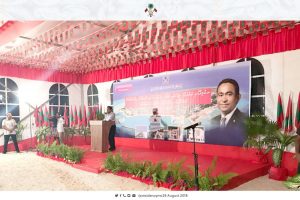 President Abdulla Yameen Abdul Gayoom has stated that his commitment to upholding certain principles for the sake of the Maldivian people has caused numerous challenges. The President made this remark while speaking at the function held this evening to mark the completion of three projects in Velidhoo Island of South Miladhummadulu Atoll.

In his speech, President Yameen noted that despite the challenges his administration has managed to achieve numerous developmental milestones. Apart from the projects undertaken in the islands, President Yameen especially highlighted the key projects carried out in the capital city Male’, such as the Sina-Male’ Bridge, the King Salman Mosque, the 25-storey Dharumavantha Hospital and Rasfannu Beach project.

Shedding light on the success of the country’s education sector, President Yameen also highlighted the world class achievements of Maldivian students in various international examinations. Moreover, the President emphasized the efforts made by the administration to improve the infrastructure resources of the education sector across the country. In this regard, he noted that within the past 4 years this administration has built a total of 774 classrooms.

President Yameen will conclude his tour and travel back to Male’ tomorrow morning.

PRESIDENT YAMEEN PARTICIPATES IN THE CEREMONY TO MARK THE COMPLETION OF THREE...PRESIDENT ARRIVES BACK TO MALE’, AFTER CONCLUDING HIS VISIT TO SOME ISLANDS...
Scroll to top