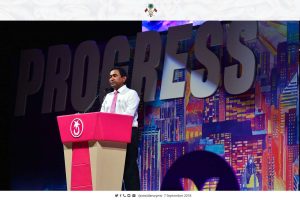 President Abdulla Yameen Abdul Gayoom has stated that the Maldivian youth was acknowledged, empowered and made part of the nation’s journey towards progress by his administration. The President made this remark while speaking at an event organised by the Progressive Party of Maldives. President Yameen also spoke on the major role played by the youth population in nation building.

Moreover, the President briefed on the plans to expand the GETSET loan scheme in the coming years, with a target of reaching 1000 youth entrepreneurs.

In his speech President Yameen noted that the recently opened Sinamale´ Bridge symbolises the Maldives’ capability to be among the top regional contenders in terms of development. The President further said that the bridge is a heritage of all Maldivians.

Moreover, the President highlighted the progress of the Velanaa International Airport development project, and noted the potential benefits it will bring on completion of the project.

“LET THE MALDIVIANS DECIDE THEIR LEADER THROUGH THE BALLOT BOX, PROVIDING...PRESIDENT YAMEEN BEGINS VISIT TO SOME ISLAND OF HADDUMMATHI ATOLL
Scroll to top