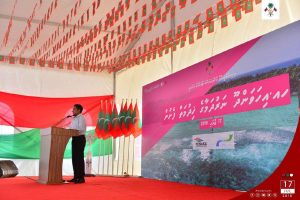 President Abdulla Yameen Abdul Gayoom has highlighted that investors see our economy as a dynamic market as our economic policies are designed to pave the way for global businesses. He made this remark while speaking at the function held to inaugurate the services of sewerage system in Ihavandhoo Island of North Thiladhummathi Atoll, as part of his current visit to some islands in the North and South Thiladhummathi Atolls.
President Yameen stated that Maldives is a country with the capability to strive greater heights in the same line as the bigger nations, despite our small size as a country.
Furthermore, President Yameen reiterated the high priority accorded by this administration to fulfill the needs of the Maldivian people. In this regard, he stated that the administration’s primary focus in sustainable development has facilitated the administration in delivering results.
President Yameen also underscored the importance of having full control over our state assets, saying that it would enable Maldivians to live with pride and honour.
The President is currently on a three-day visit to the islands of North and South Miladhummadulu Atolls. Prior to his visit to Ihavandhoo, President Yameen visited Nolhivaram Island and inaugurated the services of sewerage system in the island, and visited Hoarafushi Island and took part at the ceremony held to mark the completion of the island’s beach protection project.
The President will also visit Dhiddhoo Island and inaugurate the island’s clean drinking water services and housing project, and attend the ceremony held to mark the completion of the island’s beach protection project and the completion of the road development project. Moreover, President Yameen will initiate the services of sewerage system in Kelaa Island, inaugurate the marina style jetty in Baarah Island, and initiate the services of sewerage system of Hanimaadhoo Island.