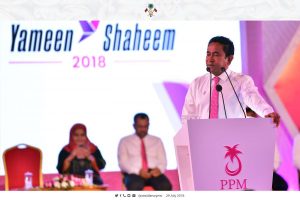 President Abdulla Yameen Abdul Gayoom has said that the upcoming presidential election is a national responsibility bestowed up on him, and that the efforts made are to serve the interest of the people and uphold the national values. The President made this remark while speaking at the function organized by the Progressive Party of Maldives this evening. The President was accompanied at the function by First Lady Fathimath Ibrahim.

Prior to his speech, President Yameen accepted the presidential ticket of the Progressive Party of Maldives, for the upcoming Presidential Election.

Speaking at the function, President Yameen highlighted that he is up against numerous challenges that have not been resolved over the years. He also said that the Maldives is a small nation with aspirations and values to safeguard. President Yameen further reiterated that his efforts were towards bringing peace and prosperity to this nation. The President also noted that he has gained the trust of the Maldivian people by fulfilling their needs and putting forth the country with sincerity.

In his speech, President Yameen said that the Presidential Election is about safeguarding the national values more than it being a contest between two candidates. Speaking in this regard, the President said that all leaders claiming to be advocates of the people’s rights must be held accountable to the public, in accordance with democratic principles, and must maintain the people’s trust in them.

Highlighting that the nation’s interest is more important than an individual’s interest, President Yameen called upon the people to always put the nation first.