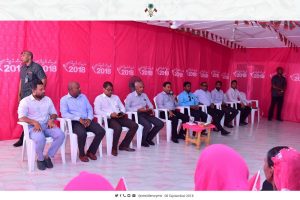 President Abdulla Yameen Abdul Gayoom has stated that today we are witnessing proof of development brought by this administration from every corner of Maldives. The President made this remark while meeting the people of Maabaidhoo Island, as part of his visit to some islands of Haddhummathi Atoll.

Speaking at the gathering, the President emphasized the administration’s commitment to ensuring equality and justice for all.

Further, the President called upon those calling for foreign intervention, to be mindful of the repercussions of involving foreign parties to meddle in our internal affairs.