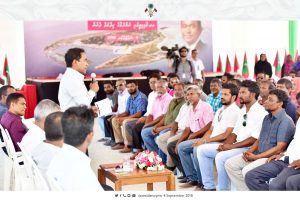 Highlighting the fact that every community desires development President Abdulla Yameen Abdul Gayoom has stated that we must all work together and prioritize the development we need. The President made this remark while speaking at the function held this morning to inaugurate the sewerage service system in Maamigili Island, South Ari Atoll.

Speaking in this regard, the President highlighted the groundbreaking progress that this administration has brought to the nation in the past 5 years. He especially underscored the development projects carried out in the islands and briefed about future development plans.

In this regard, the President stated that upgrading the Maamigili Hospital, establishing a branch of the Bank of Maldives in Maamigili, and constructing the island’s roads were all part of his plans for the future of the island.

Further, the President called upon the people to stop working against progress, and to reflect on the benefits gained from every development project.

Prior to visiting Maamigili Island, the President visited Dhangethi Island yesterday morning and inaugurated the island’s harbour and clean water services. He also visited Mahibadhoo Island to mark the completion of road development project in the Island.

As part of his current tour, President Yameen visited Mathiveri Island and Thoddoo Island and met the people of both Islands.

President Yameen will also visit Kudahuvadhoo Island as part of this two-day tour.